Almost three decades after its initial launch, it’s hard to imagine that Chipotle was almost never meant to be, or at least not what it is today. Intended to fuel Steve Ells’ investment plans for a fine dining restaurant, the now almost 3,000 store chain had minimal goals of selling just over 100 burritos a day at a single location to be profitable. When the world was moving from fast food to fast-casual, the made-to-order concept didn’t take long to catch on with a cult-like following. Selling 10x the burrito projections in the first month should have been a promising sign. The fast-casual brand quickly grew to one of the most idolized and replicated restaurant models. With strong values around local food sourcing, a playful brand positioning, and a store design built around food transparency, they paved the way for many of the thriving fast-casual brands today. With the launch of every new fast-casual, open kitchen concept, you often heard the comparison “the fast-casual of pizza,” “the fast-casual of pasta,” or “the fast-casual of salads.” It was an attractive foodservice model that proved to be disruptive by accident.

Like many successful brands, though, they’ve seen their ups and downs over the years, from executive leadership changes to corporate ownership and food safety issues. But the brand never truly lost sight of its guiding principles. Today the brand is turning another chapter in an evolutionary tale with the rollout of concepts that feel more like the fast lane of fast food than fast-casual. Changes that you could arguably say have been aggressively fueled by pandemic patterns and consumer behaviors.

Improving throughput and efficiencies has been on Chipotle’s radar for some time now. Some of you might recall the early days of digital orders made on the front line between walk-in orders. Several years ago, the brand began introducing “digital makelines” in its stores to manage the influx of off-premises orders. 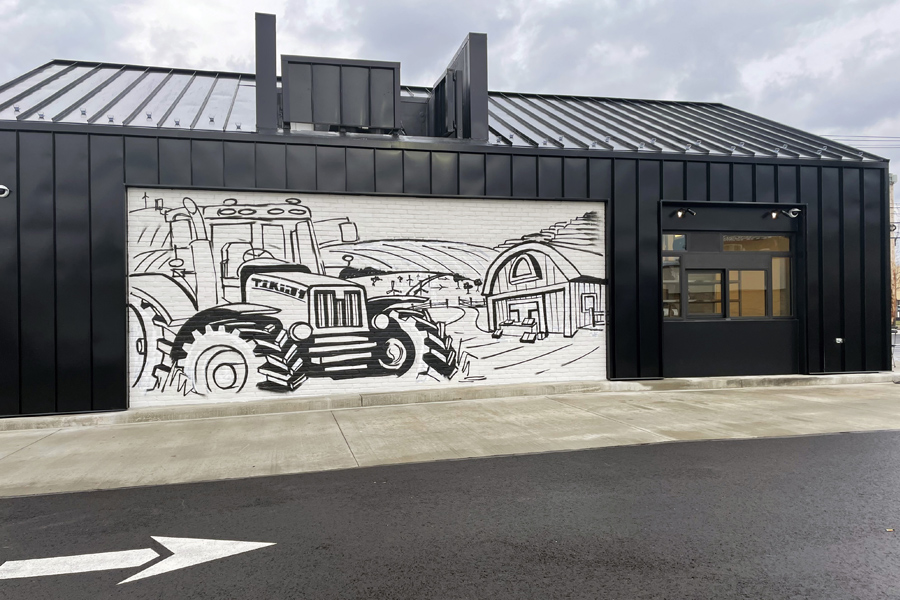 Soon thereafter, drive-thru Chipotlanes were added to further segregate the on-premises and off-premises dining experience. According to Chipotle, new restaurants featuring a Chipotlane open with approximately 15% higher sales compared to non-Chipotlanes opened during the same period. Capitalizing on the profitability, they’ve reconfigured a dozen existing Chipotle restaurants to include the digital pickup lane and plan to continue to include in future builds.

Chipotle’s digital business has grown to $1 billion, with more than half of last year’s sales (not surprisingly) attributed to digital sales. Looking to fit into urban areas where real estate is pricier and boost online sales in nontraditional locations, Chipotle most recently introduced its first-ever Chipotle Digital Kitchen catering to walk-up and drive-thru-only orders. Customers can order online through Chipotle’s website, mobile app, or 3rdparty delivery apps like DoorDash, UberEats, and GrubHub.

Traveling through Northeast Ohio, we recently had a chance to check out the new concept intended to complement the rapidly growing digital business. Situated at the corner of a busy intersection and surrounded by Taco Bell, Starbucks, and McDonald’s, the Chipotle Digital Kitchen prototype fills the space of a former small insurance office at 994 Graham Road. Perimeter parking surrounds the restaurant with a few designated spots for “App/Online Order Pickup Parking Only, and the exterior evokes the traditional modern, industrial aesthetic of the Chipotle restaurants we’ve grown to know. Rather than a front door entrance, a sliding glass window is the center focal flanked by outdoor patio seating for guests interested in still dining on-premises. A peek through the window reveals shelving and storage rather than the made-to-order line prep we’ve been accustomed to seeing. A small doorbell-like button alerts staff you’ve arrived for your order, and after a quick hand-off and you’re back in your car. For those looking to get in and get out, just not maybe their car, the Chipotlane offers guests the speed of service to swing through for a fast pick-up. “Chipotlanes are a key growth strategy for the brand. Our portfolio of approximately 300 Chipotlanes perform with the highest margins across the board, so we continue to evolve our restaurant design with formats such as the Chipotlane Digital Kitchen to best suit our growing digital business.” – Tabassum Zalotrawala, Chief Development Officer, Chipotle

Undeniably this essential restaurant pivot is not unique to Chipotle, but it does demonstrate the continued need to adapt and evolve in the current fast-food and fast-casual environment. Instead of focusing on a single service model, progressive fast-food and fast-casual brands are focusing on the right model for the right market aligned with current consumer demands.

Craving more restaurant perspectives? Check out our insights article: The New Restaurant of the Future Formula. Brands Fight to Close The Gap on Health Equity

Health and Wellness Trends: New Brands Inspiring Healthy Habits
Designing for Restaurant Agility: The Rise of the Flexaurant
Login to Chute Gerdeman
Reset Password
Enter the username or e-mail you used in your profile. A password reset link will be sent to you by email.
Our website uses cookies in order to optimize the experience. By continuing you agree to our use of cookies.
Privacy Policy
Skip to content