Meals in the Metaverse

Meals in the Metaverse

Quietly taking shape for the last several years, the Metaverse is now entering the consciousness of most consumers—and major global brands are introducing their first virtual experiences to the public. In the restaurant industry, brands from McDonald’s to Panera Bread are already leaving their mark on the Metaverse.

Their goal is to appeal to a younger generation with gamified virtual interactions that can also cross over into real life, adding real dollars to a company’s bottom line and building big brand loyalty. The Metaverse opens the gates on delivering what the consumer wants in a cost-effective way, given the entire experience is virtual.

Gen Z and Alpha are already playing and purchasing in the Metaverse and, in response, restaurant brands are rushing to develop their corners of it. A recent study of Gen Z consumers by Razorfish and Vice Media found that 57 percent of respondents said feel more like themselves in the Metaverse than in real life. Gen Zers also said they expect to see brands in the Metaverse offer free products and experiences (46%), digital worlds (23%), and advertisements (18%).

Me in the Metaverse

For those new to the concept, imagine the Metaverse as a virtual space where you can visit your favorite store, restaurant, or experience with your own custom avatar. In this space, you can play games, engage in exciting activities, communicate with friends and strangers, and earn rewards like NFTs and downloadable media. Friends can witness digital experiences together—even when cities or countries apart.

Don’t be mistaken, there’s still a bridge to reality in the metaverse. Hungry? Order food virtually and get it delivered to your doorstep. While waiting for the order, play virtual games in the restaurant and earn points for rewards in the real world. Even if your friend is across the globe, you can have a virtual dine-in experience that’s fun and collaborative. You will even be able to send a group order to each of your homes. Brands in the Metaverse

Applications for the Metaverse are endless, and brands are infusing their presence into the omnichannel buying experience. For example, immersive 3D environments on your smartphone or laptop could dip into a Metaverse to intersect with folks accessing the Metaverse through virtual reality.

The value of the metaverse lies in the ability to blend physical and digital experiences. Brands can foster awareness through unique interactive experiences that speak to what the consumer wants without building a real-world equivalent.

Is the Metaverse right for your brand? With an estimated value of $800 billion by 2024, the opportunity is nothing to balk at. What we do know is that most major brands are already in, or filing patent applications to join, the Metaverse. No brand wants to go the way of Blockbuster and ignore the future of technology.

So, what does a restaurant activation in the Metaverse look like? Here’s a current look at how some of the country’s most beloved restaurant brands are meeting (or planning to meet) consumers in the virtual realm.

In April 2022, Wendy’s opened a restaurant in Horizon Worlds—a part of Meta’s growing platform. The Wendyverse restaurant has a Town Square Central where players can jump behind the counter to serve meals to hungry avatars. Thrill-seekers can head to the Wendyverse Partnership Plaza to play basketball or fire a virtual cannon to win exclusive brand apparel.

Have you ever wanted to paraglide on a floating breakfast potato? The Wendyverse’s new Sunrise City, which opened in June 2022, offers that and other virtual adventures and opportunities to snag a free breakfast sandwich IRL. The “breakfast-lover’s playground,” also features a breakfast-themed obstacle course, according to a statement from Wendy’s.

With only a few months of engagement in the Wendyverse, Wendy’s leaders are declaring their foray into the Metaverse a victory. The major fast-food chain has applied for Metaverse-related patents to deliver food in-person and online. McDonald’s seeks to offer virtual ordering, as well as food and beverage products, NFTs, and downloadable media files, based on their patents. They also plan to launch an online virtual concert under their McCafe brand.

Their strategy seems measured, with the goal of offering patrons another way to order food for delivery to customers’ real homes, while still preparing for what’s next. In a future where people are spending time in the Metaverse, McDonald’s wants to be there, doing what they do best—selling burgers and fries. This move shows that businesses can stay in their own lanes while still exploring new paths.

With the Metaverse, the Chipotle fan experience reached a whole new level. As the first national restaurant brand to serve virtual food on the Roblox gaming platform, in 2021 Chipotle created a digital version of their first restaurant, which opened in 1993 in Denver, Colo.

“Over the past two decades, many of Chipotle’s Millennial superfans have made pilgrimages to the first restaurant on Evans Avenue, and now the brand will replicate that experience in the Metaverse for Gen Z fans,” according to a statement from Chipotle.

During a special Halloween promotion, customers could play the “Boorito Maze” game and earn points to claim an authentic burrito at brick-and-mortar Chipotle restaurants. Made from ingredients that won in a Twitter poll, this special burrito motivated gamers to win exclusive food items others couldn’t get in-store. In addition, loyalty program members could exchange their rewards points for Roblox gift cards on the website or app.

There have been more than 15.5 million visits since the Roblox application was created in Sept. 2021.

Panera has a winning track record of investing in technology and has been an early adopter of online ordering, advanced kiosk services, and end-to-end digital channels to ensure a more efficient dining experience. It should be no surprise that the Paneraverse is coming.

“Panera is always working to be at the forefront of tech advancement – as a brand, we are consistently looking for new ways to better our guest experience, whether in our cafes or in the Metaverse,” said Panera Bread’s Chief Digital Officer George Hanson in a statement.

Like McDonald’s, Panera Bread has filed a trademark application to join the Metaverse with a mix of virtual restaurants and food-delivery apps that take orders for real-life delivery.

Unlike McDonald’s, Panera is embracing NFTs as a virtual currency for avatars to buy food and beverages. Consumers can use reward points earned in the Metaverse to get Panera products in real life too. While there is still conflict between how brands use the Metaverse in conjunction with their physical spaces, companies must gain an understanding of how to meld both to create an optimal customer experience. The Metaverse is in its infancy, and for companies to move the creative needle, bold, dreamy, and (sometimes) wonky experiences could soon abound.

With many brands quietly developing their corners of the Metaverse, it’s the early adopters in the restaurant industry who are going to reap the benefits of increased brand loyalty and seamless, frictionless, omnichannel dining experiences for their customers.

With the significant number of Metaverse patent applications last year alone, it’s clear that the movement is now. In the future, successful restaurant brands need to determine how their brand fits into the Metaverse and use those digital experiences to build a new generation of loyal customers. 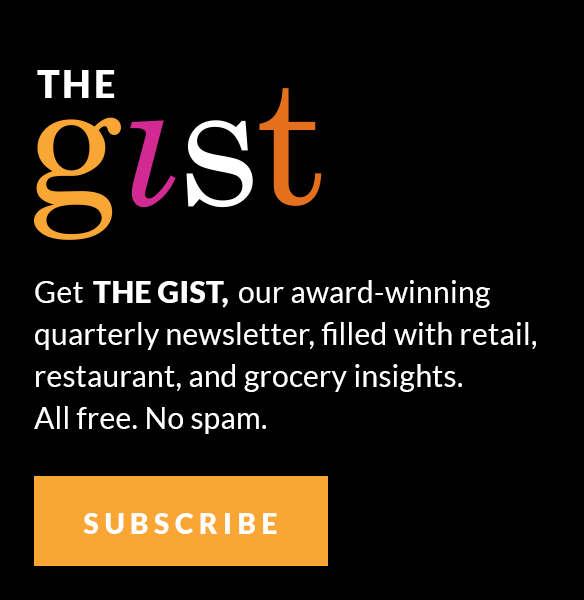 The Modern C-Store: A New Definition of Convenience

More Than Value: The Rise of Private Label Brands
Health and Wellness Trends: New Brands Inspiring Healthy Habits
Login to Chute Gerdeman
Reset Password
Enter the username or e-mail you used in your profile. A password reset link will be sent to you by email.
Our website uses cookies in order to optimize the experience. By continuing you agree to our use of cookies.
Privacy Policy
Skip to content